Cambridge originally developed as a Roman settlement on the West side of the river, around the area now known as Castle Hill. The river was important for trade and the current location of Magdalene Bridge is roughly where the original crossing point was sited.

The famous Cam Bridge that gives the city its modern name once stood here. The road was the Roman road linking East Anglia with the Midlands and the only crossing point over the river for many miles. As a consequence the town had strategic and economic importance. Cambridge developed as a market town and the river Cam was a vital part of the local economy.

In the early 13th Century scholars fleeing Oxford (the other place) arrived in Cambridge and created the beginnings of Cambridge University. By the end of the 13th Century Peterhouse College was established, the first and oldest surviving Cambridge college.

Prior to colleges being developed on the flood plain along the middle river (the backs) the area was used for wharves for various grain mills. Until the foundation of King’s College, Cambridge market stretched down to the banks of the river.

The colleges developed over the centuries, taking ownership of much of the land within the city, including but not limited to the land adjacent to the middle river. Commercial river traffic gradually declined until the construction of the railway provided the final nail in the coffin.

Punts were originally used mainly for hunting wildfowl and as a means of transport in the shallow water logged lands known as the Fens in East Anglia. The platform at the end (the deck) could be used as a gun platform and they were propelled with a wooden pole used to push against the river bed.

With no more barges and other heavy traffic using the middle river the way was open for a new, more leisurely pursuit to flourish. Punting for pleasure developed gradually over the years from Edwardian times, eventually becoming the multi-million pound industry that it is today. At some stage, someone hit upon the idea of providing tours of the colleges by punt. Little did they know what it would lead to. 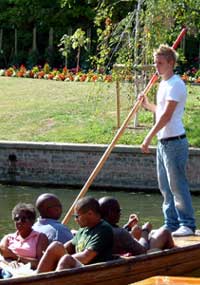 It quickly became big business with the single, 6 or 8 seater punts being tied/chained, 2, 3, 4 or more abreast in order to allow a single punter to take more passengers. Larger and larger ‘ferry’ punts were built, the biggest capable of accommodating over 20 passengers – this eventually came to a halt when it was realised that coast guard rules dictate any vessel carrying more than 12 passengers must also have life raft provision for the same number of passengers.

The maximum number of passengers carried today on a ferry punt is 12. Tying punts together was banned on health and safety grounds and the established companies lobbied to have the smaller punts restricted to a maximum of 5 passengers. The effect of this was twofold:

One company, Scudamores Punting Company quickly established itself as the dominant player in the industry.
At present they occupy 5 of the 7 available commercial mooring spaces (4 on the Cam, 1 on the Granta) the other 2 being occupied by Granta Punt and Canoe hire and Cambridge Chauffeur punts.

In addition to the number of moorings Scudamores occupy they also have all of the prime river front locations, including all of the moorings at the Northern end of the backs.

Until the end of 2005 Tyrrells Punt Hire occupied one of the two moorings on Quayside, at the Northern end of the backs. During the course of that winter they were bought out by Scudamores in an attempt to eliminate the competition.

Since most of the area along the river is owned by the Cambridge Colleges there are very few access points to the river (as discussed on the geography page).

Because of their close proximity to each other and the fact that all the prime locations are taken up by Scudamores, punt companies resorted to employing touts to bring in customers. The smaller companies in an attempt to compete and Scudamores to ensure its dominance was not challenged. Prior to the days of legal minimum wage a tout’s pay would be 100% commission based. If you did not bring any customers then you would not get paid. Touts only tout for guided tours. Under constant pressure to bring in customers, touts, especially the less experienced, would become more pushy and competitive.

At the Silver Street end of the backs an informal agreement between Scudamores and Cambridge Chauffeur punts was reached, dividing the bridge with an invisible line down the middle that touts would not cross. It meant no competition between the opposing touts. It also meant an effective market share of approximately 85% for Scudamores and 15% for Cambridge Chauffeur Punts.

No such agreement was ever reached at the Quayside area of the backs. Up until 2000 this was not as much of a problem as Tyrrells normally had around 4 chauffeurs touting for trade, happy to take what little business they could, compared to Scudamores with approximately 20 or more touts at the weekends and upwards of 10 during the weekdays, attempting to take as much business as possible.

There is anecdotal evidence to suggest that independent punters have been providing tours since at least the 1960’s and possibly earlier than that. It is likely that the first chauffeur tours were provided by independents.

In 1995 a small operation run by independents started using the unoccupied and unused station adjacent to Jesus Green. They continued to do this until the Cambridge City Council established ownership of the station and then leased it to Scudamores.

In the following year the independents moved to operating at Silver Street, using Laundress Green for loading and unloading. Scudamores responded by sinking punts around the edge of Laundress green to prevent mooring. At some stage not long after this one of these independents was offered employment by Scudamores.

In the intervening years, prior to 2000 there were a few independent punters competing with the large companies. They touted for tours from the river adjacent to King’s bridge and Garret Hostel lane.

In 2000, following a disagreement over changing pay and conditions a number of Scudamores staff left. Having approached and been declined employment by Tyrrells they set up an independent punting operation working as a loose cooperative, using second hand punts that had to be purchased in a cloak and dagger fashion (the large companies will not sell punts if they think they will be used by independents) and taking tours leaving from Jesus Green.

Touting in the Quayside and Bridge Street area the independents were once again in direct competition with Scudamores. Not only did Scudamores employ extremely aggressive and anti competitive tactics in the street:

They also had touts further and further into the town centre in an attempt to reach the customers first.

During that winter Tyrrells offered to employ the people who had been working independently during the summer of 2000, although prior to that a number of them went to work for Scudamores having been offered lucrative pay deals and then went on to join independents who had been working at King’s Bridge to form what can be regarded as the first ‘corporate’ independent operation, complete with ferry punts.

The so called ‘tout wars’ continued between Scudamores and Tyrrells, with a number of small independent punters in the mix, as well as the ‘corporate independents’ now operating from Jesus Green. At the end of 2005 Scudamores bought the Tyrrells operation, in a move seen by many as an attempt to entirely eliminate the competition. None of the incumbent staff working for Tyrrells were offered employment by the new owners. As a consequence 2006 saw a small increase in the number of independent punters, left with no other option than self-employment, should they wish to continue working in the industry, and filling a gap in the market left by the disappearance of Tyrrells Punt Hire.

The 2006 season was relatively peaceful, despite Scudamores having a number of extremely agressive touts working for them. However during the winter of 2007 a number of existing independent punters built new ferry punts, in addition to others built by people who intended to rent them out to whoever would be willing to pay the desired rent.

2007 saw a large increase in the number of independents, including a number of people with no previous punting experience. Combined with an extremely wet summer that saw a significant decrease in tourism and Scudamores continuing to employ very aggressive staff it was clear to anyone with a modicum of common sense that things were coming to a head…

The current situation can not be allowed to continue any longer. The numbers of touts are at unprecedented levels and show no signs of decreasing. However the Cambridge City Council’s proposed response does not appear to be a well thought out or fair solution, rather a knee jerk response that is heavily influenced by the desires of the established punting companies.

Independent punt operators are being unfairly blamed for causing the touting problems when it is clear that their behaviour is a symptom rather than the root cause.

The Council’s proposals will dramatically reduce the number of independent punt operators and impose commercially restrictive licence terms on them that will have a negative impact on their ability to compete and favour Scudamores Punting Company.

*It is beyond the scope of this site to give a thorough history of the City of Cambridge, Cambridge University or even punting itself but some understanding of these matters will be beneficial to understanding the current issues.

As a consequence the above information is not meant to be exhaustive nor does it claim to be 100% historically accurate although efforts have been made to ensure that nothing stated here is misleading. Please contact us if you wish to point out any errors.